For many mountain-town dwellers, home is a complicated concept, and it’s especially profound for Telluride-based artist, Eunika Rogers (pronounced ‘Yoo-nee-kuh’). Her whirlwind story spans continents and cultures, from Slovakia to Canada, from conservative Mississippi to the wild, wild West. She uses her art to explore the moving target of these constantly-shifting soils, so, unlike many tales that go untold, Eunika’s is splattered onto canvases for the world to see. 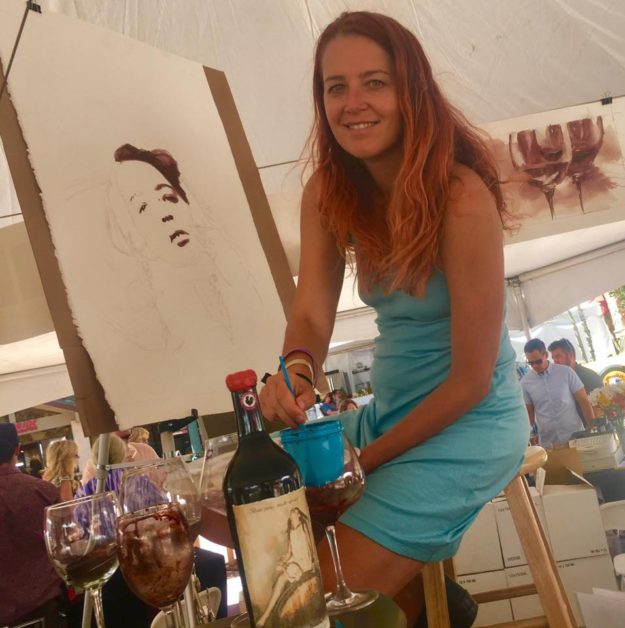 Mountain towns tend to attract seekers, those who long to find their place, a place to plant roots, cultivate character and build community. These thin-aired destinations are thick with homesick wanderers, drunk on the scent of pine trees, powder days, river ether and (potentially) craft beer. While it’s crazy hard to find housing in a high-altitude hamlet, it’s surprisingly easy to find a home, thanks to the colorful collection of rolling stones that end up settling down here – for a time, that is.

Born in Europe’s eastern bloc 40-something years ago, Eunika and her family took a permanent vacation from communism and spent four months in refugee camps before finding asylum in Ontario, Canada. There, she rode out her teen years and then packed her bags again, saying goodbye to her family and heading south on a tennis scholarship to Delta State University in Mississippi.

During her days as a Fighting Okra, Eunika studied graphic design and ceramics. While earning her MFA at the University of Memphis, some clay splattered from the pottery wheel, covering her in a stubborn red that would never wash out. A light-bulb went on. She’d been secretly painting for awhile, but the happy accident unearthed an art deeper than a hobby or career path. Painting would soon become her way to process life, but the mode would be something entirely – wait for it – Eunika.

She returned to Mississippi for a professorship at Ole Miss University teaching graphic and web design, but painting had dug its claws into her soul. It was then that Eunika forewent traditional paints and opted to make her own – out of the very dirt that stained her clothes that fateful day in Tennessee. She started with Mississippi mud, a ruddy clay full of history and iron-oxides, collected in zip-loc bags on her outdoor adventures. 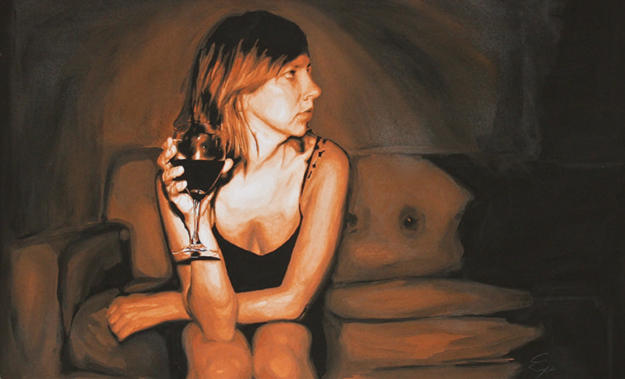 An avid photographer already, Eunika chronicles her journey, people in her life, important places,nature,  events, herself, through photos. She then paints these images using a process called the “topographic technique,” a layering method that makes all clay colors roughly the same when they’re wet. Sometimes rock pieces are left in for added texture, while charcoal helps shade when darker colors are needed. With the dab of her brush, an open canvas morphs into a narrative of flower, form, faith – whatever the theme of the season is for the talented expressionist.

To Eunika, home is the dirt, landscape and even wind of where you are right now in this moment. She gathers up these natural elements (called terroir in oenology) on the soles of her shoes, in her hair, in her belly. These in turn inspire or literally mix into organic paints that serve as her storytelling platform. Like a robust cabernet, the paints she crafts from these ingredients help to create her very own, personalized terroir, unlike anyone else’s in the world. The result: gorgeous paintings fit for wise eyes. 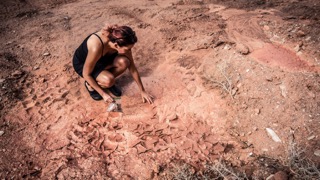 “It’s about me and how I blend into this landscape,” she explains. “We speak of terroir when sipping on a glass of wine, but what about my terroir? What would that look like, smell like, feel like, taste like?” 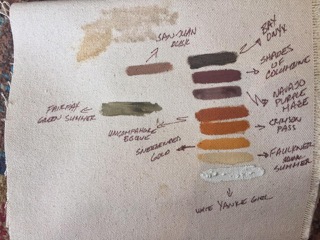 Heavily inspired by musicians spanning many genres, the melodies behind her paintings range from Vivaldi to Pink Floyd, but Eunika calls herself Red Dirt Girl after the beloved Emmylou Harris. However, it’s her father’s childhood nickname for her that best captures her essence: “stebotava lastovicka,” which means “chirping swallow” in Slovak, her native language. This migratory bird flies far but comes back, building its nest out of clay.

“I drift and I roam free from home to home,” she writes in her journal. “I am alone on this migratory trail, and I hunger and lust to find pieces of truth, of how I fit into a greater scheme of things. Just like a swallow, I build my life and my nest from clay that I find during this search. In spring of each day, I return to a fountain to document with ardor my dreams and travels.”

Like the swallow, Eunika explores through flight, only for her, it’s as much a spiritual migration as a physical travelling through the world. As a child, Eunika recalls visiting chapels and churches in castles throughout Europe. Though she was raised an atheist, Eunika knew instinctively what to do upon entering these sacred spaces.

“When I walked into the church – even though nobody explained to me what was going on – I felt like I was supposed to kneel,” she recalls. “I felt something bigger than myself.”

That feeling faded with the move to North America, where the sense of awe can be lost in the younger church buildings of modern times (just “buildings with people in them,” describes Eunika.). Her spirit wouldn’t be stirred in this way until Eunika and her husband came upon an aspen grove during a hike on their first visit to Telluride. Upon entering the ‘forest cathedral,’ Eunika was swept into that long-lost surge of holiness.

“I just stopped and kneeled,” says Eunika. “It was just like the gothic cathedrals. I’d found my temple.”

When she moved to Telluride in the summer of 2016, she started painting aspen groves. In Colorado, aspen sells, naturally, but Eunika began projecting her spiritual connection onto these trembling poplars by adding bells and doors and tiny adjustments that gave the feeling of stepping into a sacred place. These days, aspens serve as one of the strongest grounding forces in her life.

“Through this journey [to find a home], you’re tempted to go back to the past because it has its own comforts and securities,” she writes. “The ‘ringing of the bells’ or quaking leaves bring me to the present of where I am now. Thousands of miles from the cathedrals of Europe I discovered cathedrals of forest where I have the freedom to believe. It’s my temple. I get to ‘build’ my temple out of clay, too.”

Despite her ‘building’ both her nest and temple out of clay, there’s no placing Eunika’s curious approach to painting in a box, considering she doesn’t limit her exploration of terroir to just dirt. For example, she’s recently started using wine, too, inspired by this reflection of author Ayn Rand’s:

“I like to think of fire held in a man’s hand,” writes Rand. “Fire, a dangerous force, tamed at his fingertips. I often wonder when a man sits alone, watching the smoke of a cigarette, thinking. I wonder what great things have come from such hours. When a man thinks, there is a spot of fire alive in his mind – and it is proper that he should have the burning point of a cigarette as his one expression.”

Eunika mused, what would a woman’s “burning point of a cigarette” be? From what handheld expression do women find their genius? But of course, she thought: a glass of red wine. So Eunika created a series of paintings featuring influential women she knows who she feels are living life by their own rules. 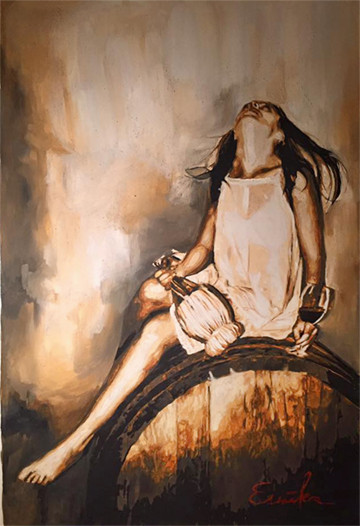 “to be titled after its bottled”

This May, she took the wine theme one step further, moving beyond sipping it to painting with it. She already spends a lot of free time in Italy, where she creates wine labels for her friend’s vineyard in Tuscany. While there, she digs up local clay from that vineyard for the canvas, but her latest project involves also painting with the wine harvested from that clay. She plans to return this fall for harvest season to capture the terroir of not just the wine but also that of the winemaker.

“I want to put myself in the environment of this age-old symbiosis of the wine-growing region where clay and wine exist as one, as we do in body and blood,” she says.

For Eunika, wine is just another layer of her personal terroir, one that she’s busy exploring back in her new home in Telluride. Next time you’re in town, swing by the Kamruz Gallery to watch her paint or view her most recent pieces. Her work is also on display at the Michael McCormick Gallery in Taos.

“I feel very connected here because of the soil and landscape and support I get from the community,” she says. “I’m rooted here. This is my place, the next chapter of finding myself.”

At the end of it all, Eunika says that home is where you feel at home, so surround yourself with people who get you – a solid reminder for any mountain-town dweller but more importantly an affirmation for anyone boldly pursuing their life’s art.